Today I have a polish that instantly made it's way up onto my top 10 list for 2012. Can you guess? Yep, it's Zoya Zuza! When the first swatches of the Summer Zoya collections came out, this polish really made the buzz. I loved Scrangie's swatches, but I managed to convince myself that I didn't need it... until I made my Nail Polish Canada order for the Fall Zoyas. I'm SO glad I got this polish though. It's gorgeous. The shimmer reminds me a lot of Cult Nails' Let Me Fly and Butter London's Victoriana, but the shade of blue is much more turquoise and fab. It's amazing. My pictures do this polish no justice. 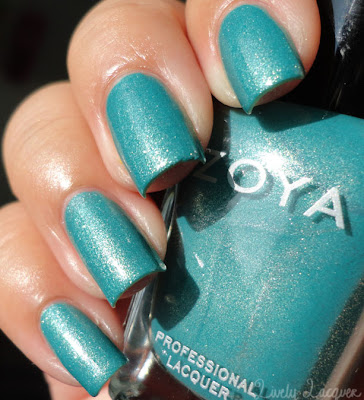 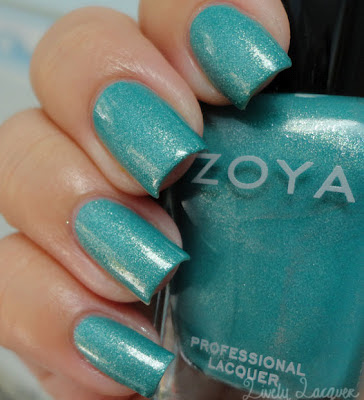 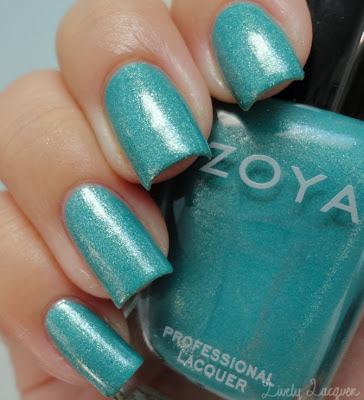 Today I have a polish from last year's summer collection from Zoya. I managed to grab the entire Sunshine collection (which is super gorgeous), but I haven't really swatched it yet - or really worn any of the colours for an extended time. Not really sure why. Today I have Rica, which is like an awesome strawberry-blonde colour with the golden shimmer. I like how it looks in the bottle and in pictures, but when I actually had the colour on my nails I wasn't really floored by it... strange how some things work. I don't think the colour really suits my skintone, but I'm willing to try it again one day. 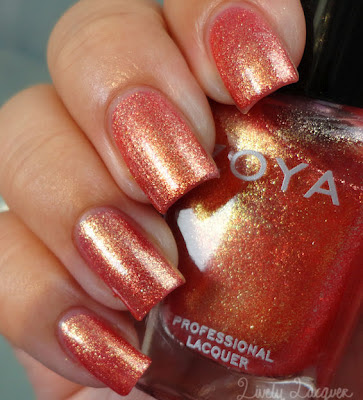 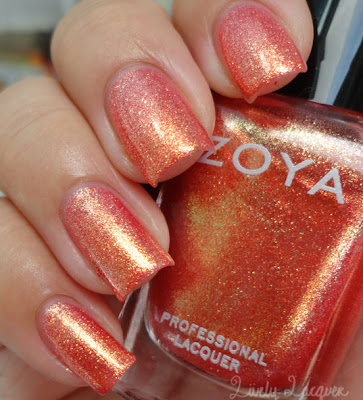 Today I have one of my top lemmings from the Beach collection for Summer 2012 from Zoya. I was oogling all of the swatches of Arizona and Zuza online, but I finally took the plunge when Nail Polish Canada put up the Fall Zoya collections. In the bottle, Arizona looked really bright - I was hoping it'd be a bit more subtle - but on the nail it isn't too bad. The colour itself reminds me of Kraft's Mac and Cheese or Cheesewhiz. 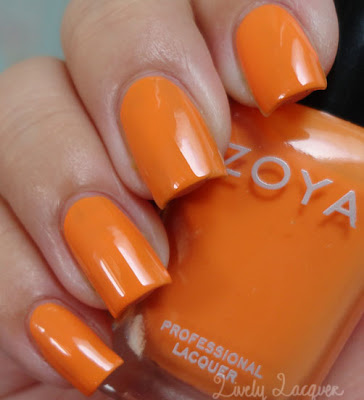 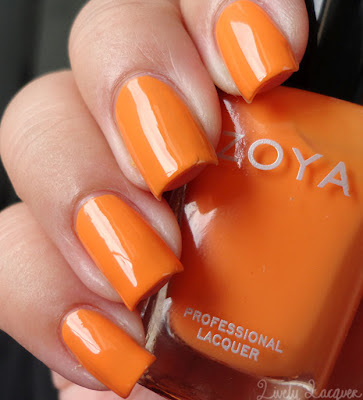 Sorry about the weird bit on my middle finger nail - it has been like that for ages and only really shows up in pictures every once in a while!

Today I have a polish from the Zoya Diva collection for Fall 2012. FeiFei reminds me of Zoya Crystal with duochrome flecks that make it really pretty. In the bottle, it's really obvious - but it's much more subtle on the nail. In an attempt to highlight the pink duochrome, I've put one coat of FeiFei over Hits Mari moon Cutie Pie (which is a gorgeous teal - pink - gold rainbow-y multichrome). 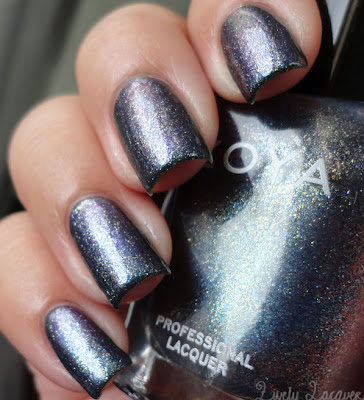 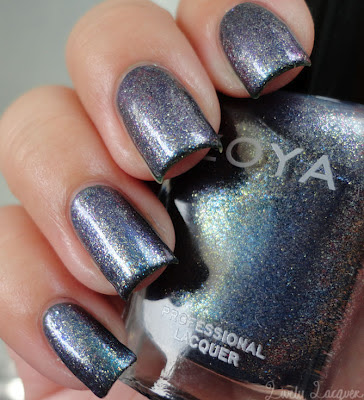 Thanks for reading! :D

I'm feeling a bit down/frustrated/stressed out/angry right now. I'm going to start ranting in the next paragraph, so if you don't want to read it, you can just skip it over!

I'm supposed to start a work semester at a company in September (until the end of December) and I had training for the past two days that really pooped me out. I was talking with some of my other fellow new work semester students, and they've all been contacted by a government agency to say that they've been awarded the funding they applied for... and I haven't. Apparently they've also had to sign a formal document about employment (which I haven't had to yet), so I have this sinking feeling that they're waiting to hear if I get the funding before committing to hire me... and if I don't get it, they'll decide to drop me. Not sure if it can work this way, but I'm still really stressed out.

Okay, rant off. If any of you read that, thank you so much for bearing with me! <3

Anyhow, since I fee a little bit better now (but still stressed) I'm going to post a mani featuring polishes from one of my favourite brands ever - Cult Nails.

I think I'm going to spare you from any more epic rambling of mine, so here are the photos! Enjoy!


Thank you for reading even though I can be a bit crazy sometimes, you guys really mean the world to me!

PS: I'm leaving for the east coast (I'm staying in the Bethesda area) on vacation for the next two weeks, so hopefully I'm planning tomorrow to get my mojo together to shedule up some posts for the time I'm away. That being said, this will probably be my last live post before I take off on Monday night. See y'all in a little bit! I'll be on twitter until I leave and for intermittent periods during my trip!
Posted by Marisa at Friday, August 17, 2012 2 comments

How are we all today? I'm relaxing a bit but still kinda stressed since I have training for my new job coming up next week. I reallllly need to go find my notes so I can review some of the more important protocol bits (I'll be working in a lab). I made a TON of orders in the past few days. Cult Nails is having a sale where all of their polishes are $7 ($3 off each) and Maria has announced that some of the polishes (including my beloved Feelin' Froggy) are going to be discontinued. I know I said I'd be really sad if she dc'ed Feelin' Froggy, but I think I feel better since it was on sale and I was able to grab a back up bottle! I also finally caved in and bought a bunch of soaps from KBShimmer. I'm planning on purchasing a sugar scrub from them too, but I figure I'll wait until I get all of my mini soaps and smell them all instead of purchasing such a big tub blind. :P I'm also super excited that Nail Polish Canada is going to get the Zoya Fall collection in tomorrow. Right now they're having a free shipping for Canadian Orders over $25, so you bet I'm going to grab some. I'm most excited for Evvie (since I love the name), but I'm going to pick up a bunch of other colours too. I love Nail Polish Canada as they're based really close to me, so I get my orders within a day or 2 of shipping. :D

Oops, that was a lot of ramble. Sorry guys. Lol!

Annyhow, today I have some Orly polishes from the Spring for you! These have been sitting in my swatch folder for a while, but I have no idea why I haven't posted them yet since they're great Spring colours! Let the spam commence! 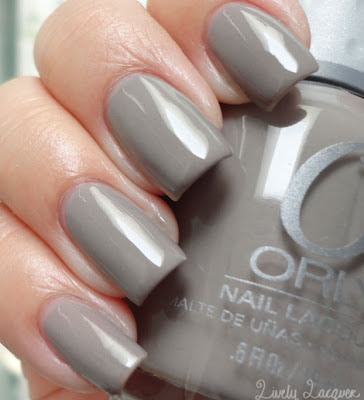 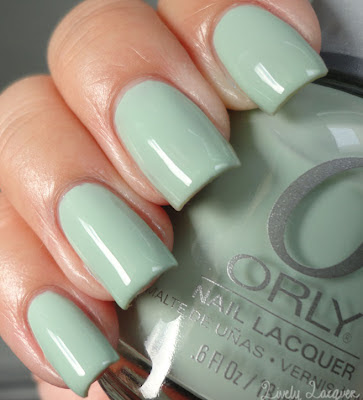 Jealous Much?: Pretty mint creme. I used this in my Mint Oreo chip NOTD a while ago. If I remember correctly, I thought the dry time on this polish was fairly long. 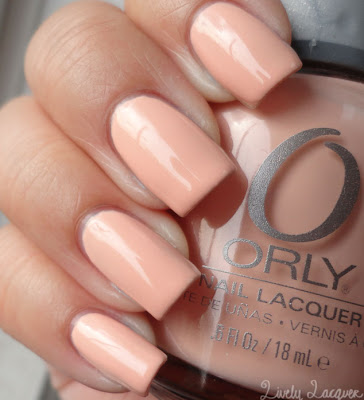 Prelude to a Kiss: Pretty soft peach for Spring. I love this colour. 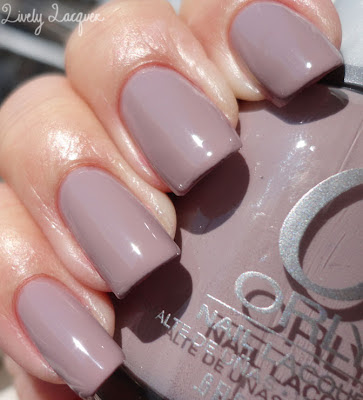 
That's all for today! Thanks for reading!

Pretty and Polished Party on my Yacht

I hope y'all are enjoying your weekend. Today I'm having a lazy Saturday, just hanging around at home. It's really hot outside today too, so I guess being at home is better than being outside... I already feel like I'm melting in here, so I'm sure it's much worse outside. :P

Contest update: the winner of my 1 year blog anniversary is Kristina! Congratulations again!

Anyhow, onto the polish! This was my first polish from P&P... I also have Sand Art and Bubble Tea now, but for some reason I haven't found any of my pictures of those, so I'll have to redo them. *sigh*. Party on my Yacht is gorgeous though, it reminds me of multicoloured sprinkle birthday cake! 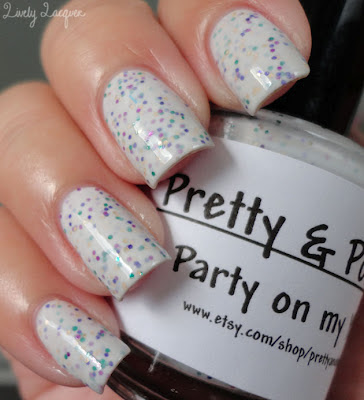 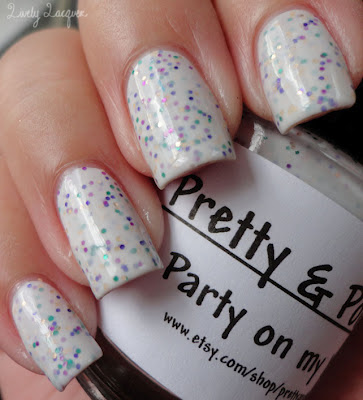 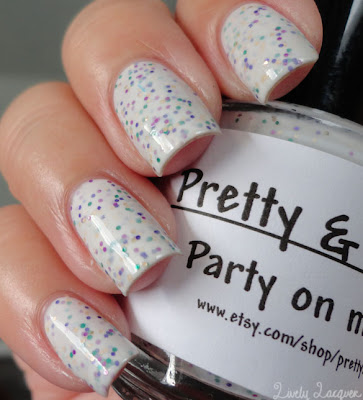 That's all for today! I'm really craving something cold and sweet right now, like a mojito. Mmmm, mojito.

Thank you for reading! Have a great weekend!