This is where I get on the polish train, Easter & some thoughts on cracklemania..

My exams officially ended Saturday morning, so now I'm just relaxing as much as I can (and worrying about my final marks).

I'd just like to do a quick introduction of myself to whoever may be reading this blog, so here goes..

My name is Marisa, I'm a Canadian university student, and I've recently (we're talking about something like the past few months) become obsessed with nail polish. I was never really exposed to much nail polish, and when I discovered that it could come in so many different finishes (I think holo nail polish really blew my mind).. I just had to have more.

Since this is a recent obsession, my stash is still pretty modest, but it's growing at an even faster rate since I discovered the joys of ordering online. ;)

This coming summer I'll be taking a few courses, trying to find a job (this hobby is turning out to be an expensive one..) and hopefully posting on a regular basis.

Lastly.. I've been following tons of other blogs for a while now, and I feel that my pictures are going to suck for a while before I can get them any better.. I have a lot to learn, and chances are I won't have a lot of time devoted to give myself a proper, super tidy manicure.

Whew, OK, that's enough intro.. Now for my Exam/Easter nails!
On my right hand I used China Glaze -Four Leaf Clover and Sally Hansen Xtreme Wear -Green with Envy lines, and Milani -Gems over the ring finger, and on the left I used Joe Fresh -Berry and Revlon Top Speed -Vintage on top. I did this on Friday night while a late night cram/procrastination fest (exam was Saturday @8:30AM), so it's a bit messy.. 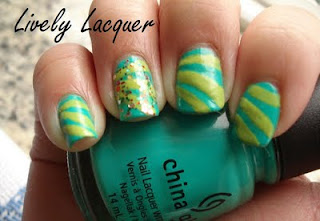 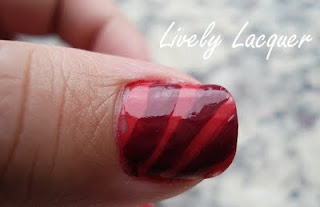 Left Hand
I'm also left handed, so I had a lot of trouble trying to do my left hand (that's why the pic is only of the thumb). I like how it turned out, although I am a bit miffled that FLC totally didn't come out the right colour.. it's more green but it can appear more teal, depending on the lighting. I also think that it would have been just fine without Gems on the ring finger, but my sister brought that for me yesterday, so I was dying to give it a go..
I got FLC in a large online order a few weeks ago, the Joe Fresh polish from a nearby Superstore (it's 3 for $10 or $4 for 1.. which is not bad, but the bottles contain 6mL each, Gems from my sister from her trip to Seattle, and I got the Revlon from Superstore also.. $0.99 on sale, who can resist that.. :D
Aside from that, nothing much I want to say besides maybe some news..
I've read that Sally Hansen is churning out some Crackle polishes, and that China Glaze is adding a few more metallic crackles sometime in the near future. (This is all in addition to the OPI crackle collection that is going to be released soon)..
Even though I totally got sucked into nail polish by learning that there was nail polish that made a crackle effect but just putting it on (another one of those things that blew my mind), I've lost some interest in crackles.. I bought Lightening Bolt from the CG crackle collection (white) and was going to get the black, teal and the grey.. but I'm not sure if I would use them as often as I'd thought I would.. plus at $8-$10 retail here I don't know if I'd want to buy them and not use them often.
What do you think? How long is this Crackle trend going to last for? What crackles do you have?
Hope you had a great Easter!
Marisa <3
Posted by Marisa at Monday, April 25, 2011 0 comments

Just to let anyone that has stumbled upon this page know that I'm hoping to start posting on this blog after I've finished up my final exams (last one is on the 23rd). When that time comes I'll post up a more thorough introduction of myself!

For now, it's crunch-time!