Today I'm going to show you what's currently on my nails... I've been pretty uninspired lately so up until yesterday my nails were naked. I guess it's because I'm expecting a lot of nail mail. I'm really excited for anything I purchase online to come, especially nail polish. I don't want to do a really awesome mani now and have the mail come later and end up having to take it all off so I can try the new goodies. Does that even make sense? lol. Right now I'm waiting for some jewellery supplies I ordered from Etsy, my Cult Nails $5 sale order (I bought Nevermore, Feel Me Up, Scandalous, Seductive, Enticing and Manipulative), I also gave in and ordered Picture Polish's Mask-a-rade and Monroe from Llarowe during her birthday sale, and I preordered the Fairy Tales collection from Cult Nails as soon as the preorder was live. Yeah,  I'm excited. :D

Anyhow, onto the nails. I was feeling pretty uninspired until I saw this post by Ivana at Ivana Thinks Pink. I was instantly smitten with the look and I wanted to do something like it right away. I used this awesome awesome awesome tutorial for gradients by Sam at the Nailasaurus, so if you like the look... make sure you go have a look through it, and have a gander through her other posts as well! Her manicures are amazing!

So I actually have 2 NOTDs to show y'all since I did 2 different gradients for each hand. I was initially thinking about putting a coat of Milani Gems on each nail (to get a look like Ivana's mani), but the glitter on my trial run (on my thumb) came up more clumpy and dense than what I wanted. Instead I used a thin coat of Essie's As Gold as it Gets on each nail. 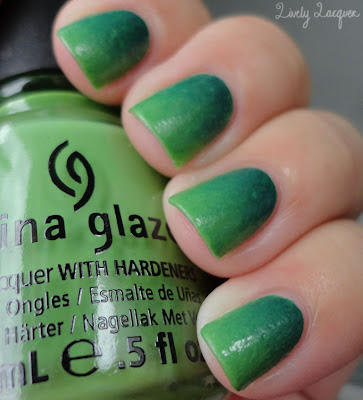 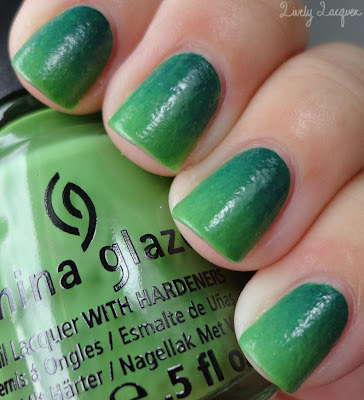 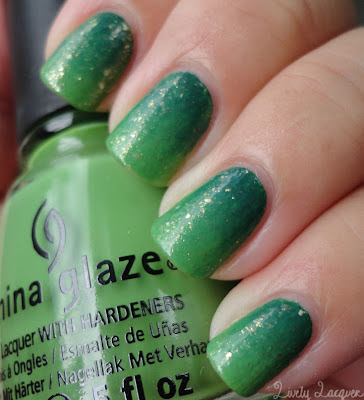 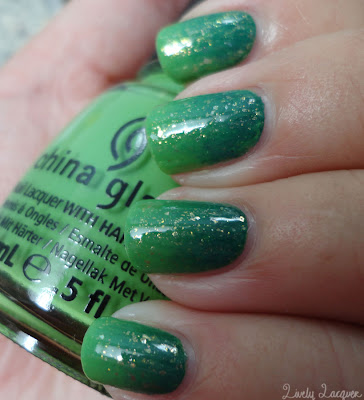 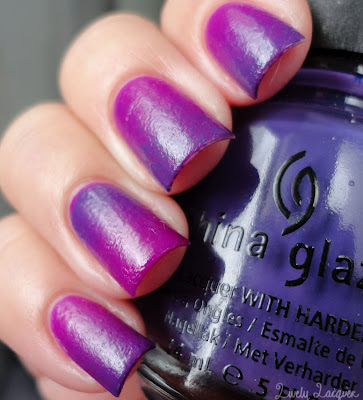 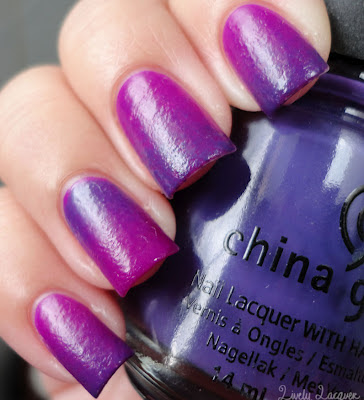 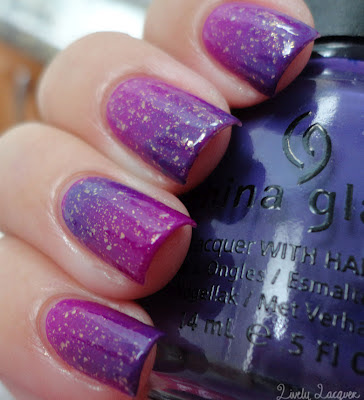 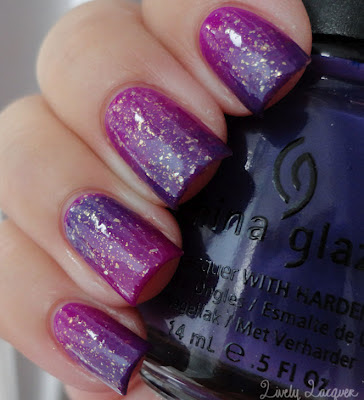 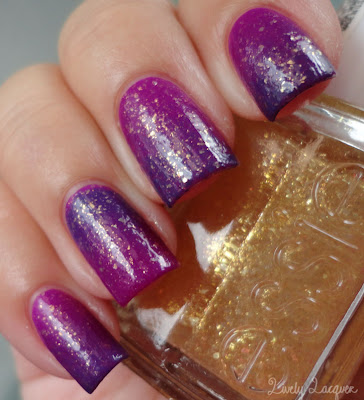 Yes, my nails are a different shape on my left hand. I have them more rounded since I usually don't use them for swatching (I'm left handed so it's easier to swatch on the right), and I usually like to cut them into nubs. I'm not really a fan of square shaped nubs, so they're rounded. I wasn't planning on posting any pictures of my left hand, but I liked how it turned out, so here they are! Also, my left hand doesn't have the reversed gradients like on my right hand... I didn't reverse the colours on my ring finger because I thought that the light green would really clash with my skintone.

Also, the pictures of my right hand don't quite accurately portray the colour... it's much more red-y magenta.

For my left hand, I used:
Dark Green: Essie - Going Incognito
Light Green: China Glaze - Gaga for Green
Gold Flakies: Essie - As Gold as it Gets

I'm really happy with how this turned out. I think I'm getting a hang of the gradient technique, so I can't wait to try it again with other colours.

Thanks for reading! I hope you all enjoy the rest of your week!

Short post today, I've been feeling really stressed out lately - trying to keep the lid down on the blender before it explodes in my face!

Today I have a gorgeous polish from Butter London and Essie to show you! Perfect colours for this season!

Thanks for reading! Happy Sunday!

Sorry for the lack of posts, but I've been away from my laptop since I was staying at my sister's house for the weekend!

Today's post is something that you may have seen me post on instagram... I started making a belated present for my cousin using some awesome jewellery supplies, and I finally finished it yesterday! Lots of images ahead! 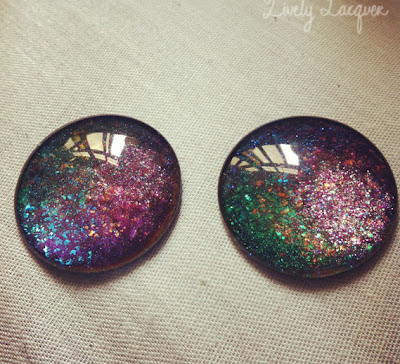 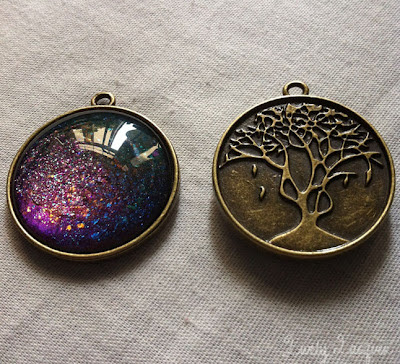 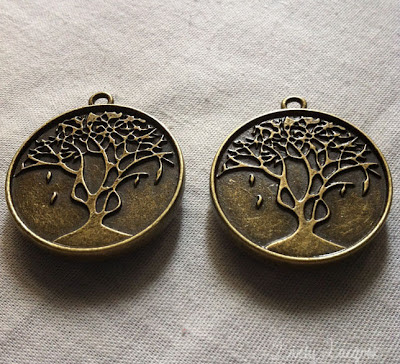 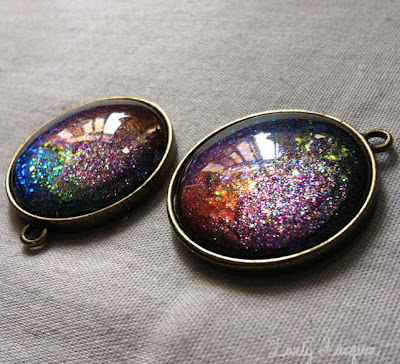 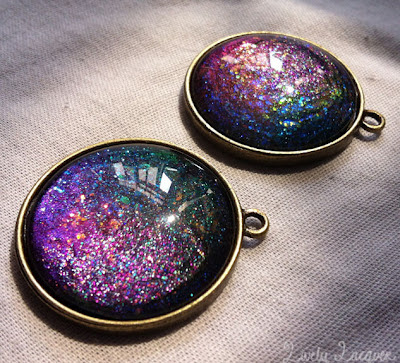 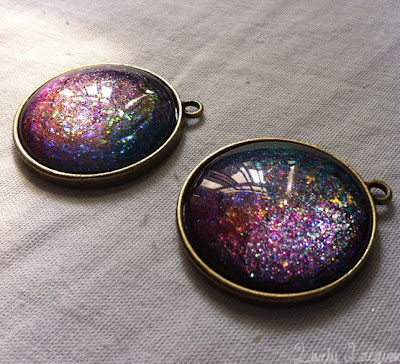 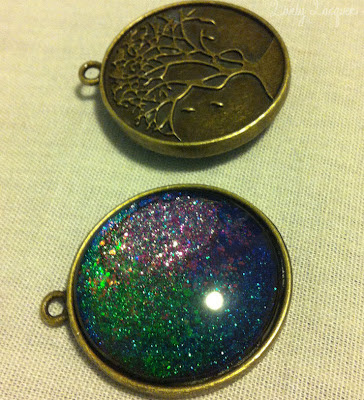 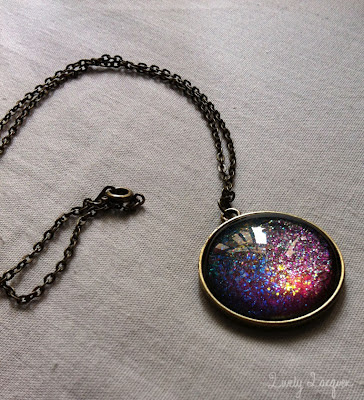 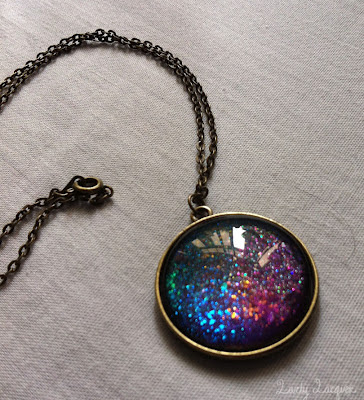 I used an assortment of glitter/flakie polishes for this, and the base is Specialita Hits Mari Moon Dreamer over Cult Nails' Time Traveler. So, if you were wondering... yes, the base changes colours! Yay! :D

I ended up ordering a bunch of supplies from Etsy, so I'm looking forward to making more jewellery! It's addicting I tell ya :P

And now a gratuitous picture of my dog, Yuki! 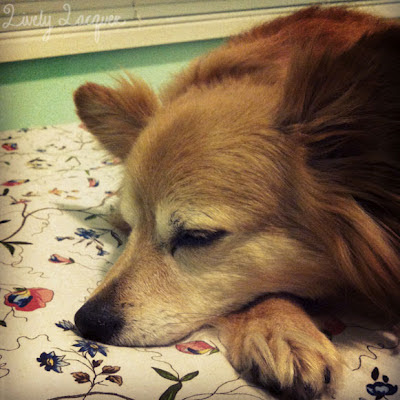 Today I'm going to show you my first attempt at a gradient on my nails! Okay, well not quite. I was fully intending on making this a gradient, but the colour combination (I was out of ideas, but Marta from ChitChat Nails suggested a beige-tealy blue gradient... thanks Marta!) reminded me of the beach, so I ended up just sponging my nails for a more wispy look. 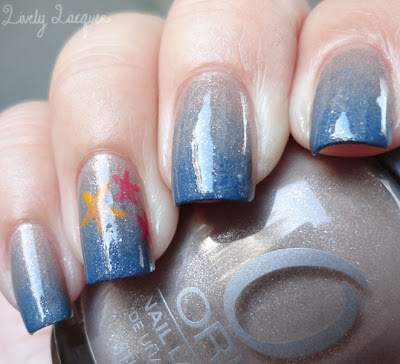 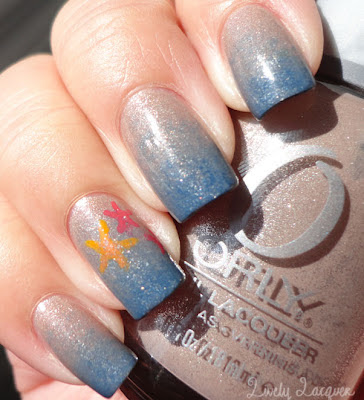 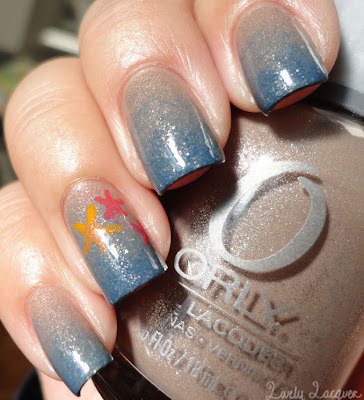 In retrospect, I could have done more to make it look... more realistic-ish (sea foam, etc etc), but I rather like it simple. I decided to add the sea star-like shapes at the last moment as an accent.

Thanks for reading! :D

Today I have my favourite polish from the Hunger Games collection to show y'all! I'm usually not a big fan of orange nail polish, but this one caught my eye, and the name just gave me another reason to buy it!

When I was in highschool, we read Heart of Darkness by Joseph Conrad, and we mentioned rivets quite often in our analysis of the novel... so when I heard that this was called riveting, I just had to have it. :P

Anyhow, onto the pictures!

I've seen this one matte before, in a post at Fashion Polish, so obviously I had to do it too. ;)

I loove this colour. Crazy in love with it. I like it both ways too! There's something about that gold shimmer that makes this colour so fantastic. If I could only get one polish from this collection, it'd be this one - hands down.

What do you think? Is this fab or what? :D

I'm still in the process of hunting down the China Glaze Poolside collection polishes to compare with some of the Summer 2012 Neons. I think for now I'd probably describe the poolside collection as being bright as &^%# neons, whereas the summer neons are a little bit more toned down (aka not crazy, radioactive neon). I'm still hunting them down, although I think finding them is going to take a while. I've already exhausted all of the local stores that sell CG, so I'm going to have to broaden my horizons.

I'm going to try to keep this post short - I walked 17km today for the heck of it and I'm super exhausted!

Today's mani is in honor of my favourite DQ Blizzard flavor EVER. I recently re-discovered mint icecream (I love this stuff!), so obviously mint oreo blizzards are my favourite now. 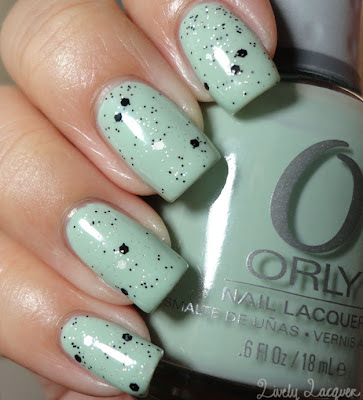 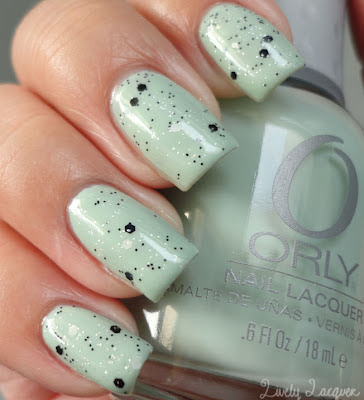 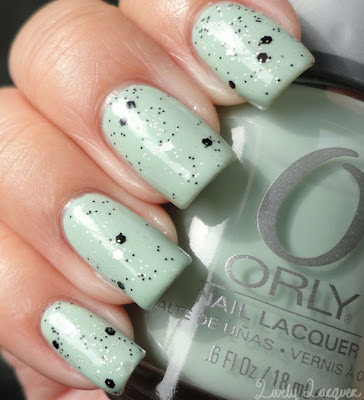 I used Orly's Jealous, Much? for the base, then topped it with a coat of Nubar's Black Polka Dot and White Polka Dot and topcoat.

I find that Layering Black Polka Dot and White Polka Dot kind of reduces my lemming for the infamous Connect The Dots. It doesn't have the bar glitter, but it still works for me. ;)

Thanks for reading! Hope you all have a wonderful weekend!

I was feeling pretty stressed out today (still am actually), this amazing course is being offered at another local-ish university and I reallllllllllly wanted to take it. Unfortunately, I only found out about it yesterday, and the registration deadline is tomorrow. I was told that the paperwork that needed to be done in order for me to take the course would take a few weeks (time I wouldn't have), so I'm most likely not going to be able to take it. Phooey.

Anyhow, aside from all of the somewhat depressing news (especially since I was super excited about it), I went out and managed to get my hands on the last 3 polishes from the Summer Neon collection! My set is complete! Yay! I also looked for the neons from the Poolside collection that was released a while ago, but my beauty supply store didn't have any of them in stock. Drat.

I have a bunch of pictures so a cut will be employed once again... 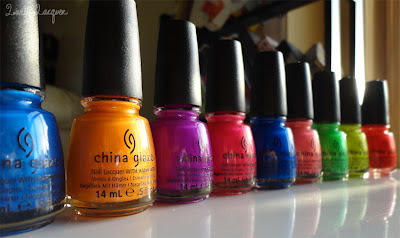 Recap: In the first post of neons, these were the 9 that were included: Left to Right: Splish Splash, Orange You Hot?, Beach Cruise-r, Love's a Beach, Ride the Waves, Pink Plumeria, I'm with the Lifeguard, Sun Kissed, and Surfin' for Boys

Today I have 9 polishes (out of 12) from the China Glaze Neon collection for Summer 2012. I initially only bought Ride the Waves (since I'm pretty much obsessed with bright blue cremes for now) but I ended up going back to buy the 8 polish set. I mainly bought the set because my inner hoarder told me to, but now I'm really glad I gave them a try!

Lots of pictures in this post so I'll put them under a cut! Please click "Read More" below to see the swatches!

Sorry for the lack of recent posts, I finally got my camera back yesterday so now I have lots of recent photos to share with you all!

Today's post is what is actually on my nails (on my right hand anyway- my left hand is nude at the moment). I used Gouda Gouda Two Shoes from OPI's Holland collection as the base colour, and then stamped on a pattern from the N.Nail plate B76 using Illamasqua's Load. 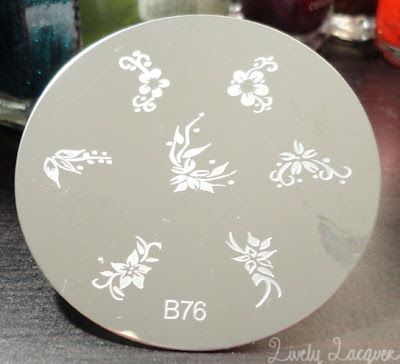 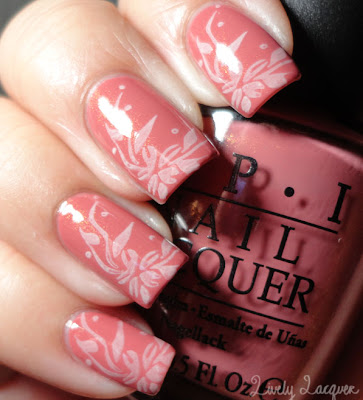 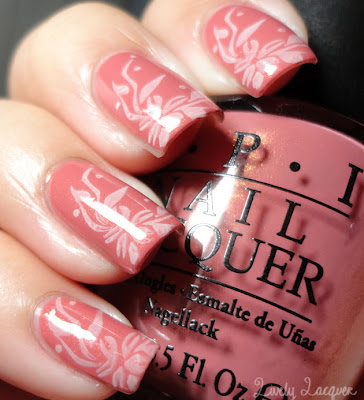 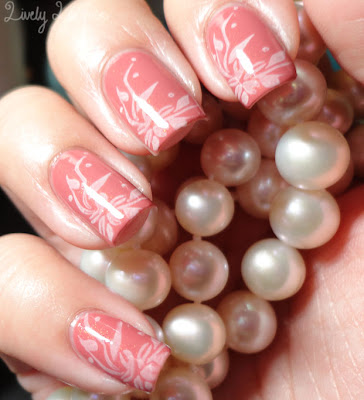 Overall, it's a pretty subtle look on my nails. Lately I've been obsessed with neutrals (like the OPI NYC Ballet collection) and cobalt blues (major lemming is RBL's IKB 2012, but I'm unwilling to fork out the cash for that one, and it's sold out now anyway thank goodness). I saw the 8 pack set of China Glaze Neons for sale and... I just couldn't do it. Neons tend to make me looked more tan than I already am, and I haven't been able to get my head around it yet. Maybe when the sun comes out to shine for the summer (it has been rainy and cloudy here since ever) I'll change my mind and go back.

I didn't have any trouble with stamping from this plate at all (yay for me!). I absolutely feel like I've seen this design on another plate from a different brand though, which is kind of odd. Then again, I think the same patterns have been used on plates coming from several different brands so it shouldn't surprise me much.

Now for a giveaway update... I've been looking for potential giveaway prizes, and I haven't really found any that I think will good enough. I was thinking about looking at the recent releases and trying to choose something from those, but I haven't been feeling any of them. I've looked at OPI, China Glaze, Butter London, Essie and Deborah Lippmann, but nothing has really stood out to me. I'm going to continue looking!

In terms of Fall collection previews I've been seeing, I'm pretty excited about the China Glaze On Safari collection (saw nail wheel swatches of those) but not too amazed by the OPI Germany collection. A lot of the colours look pretty vampy, and vampy is something I don't really wear that often. We'll see.

The N.Nail stamping plate featured in this post can be purchased here. KKCenterHK is an online store that sells various nail products (and lots of other beauty stuff). At the moment they have an anniversary sale (25% off)! you can also get a 10% discount using the coupon code: livelylacquer. I'm not sure if you can combine the two discounts together though.

Anyhow, I've been rambling on for a while, and I should probably stop! I hope y'all enjoyed the NOTD and thanks for reading!

**The product(s) featured in this post were provided to me for review purposes. The opinions expressed in this post are purely my own. For more information, please see my Disclosure Policy.